The original Muckross Abbey was founded by Cormac McCarthy Mor in around 1340. In a vision, McCarthy Mor was told to found a monastery nowhere else but on the ‘Carraig na Chiuil’ or ‘Rock of Music’. Cormac sent men out across the local area to search for this stone. They were just about to give up and return home in failure when they stopped for a rest upon a stone. Upon this stone they are said to have heard beautiful music without any apparent source.

The Abbey was refounded for the Observatine order as a Franciscan Friary in 1448 by Donal McCarthy Mor (Cormac’s Great Grandson). Franciscan patronage was something that obviously ran in the family as Donal’s father was also the patron of a Franciscan community in Cork. The Abbey as we see it now took 20 years to build and Donal McCarthy Mor received a Papal Indulgence (reduction in punishment for sins committed) for the work.

There is a native Yew tree growing in the centre Cloister of the Abbey. This Yew tree is traditionally said to be as old as the Abbey itself. There is a story locally that the tree is haunted. It is said to bleed if one should be brave enough to nick the bark with a knife. What isn’t as well known is that the sap of the Yew tree is blood red for several hundred years of it’s life! 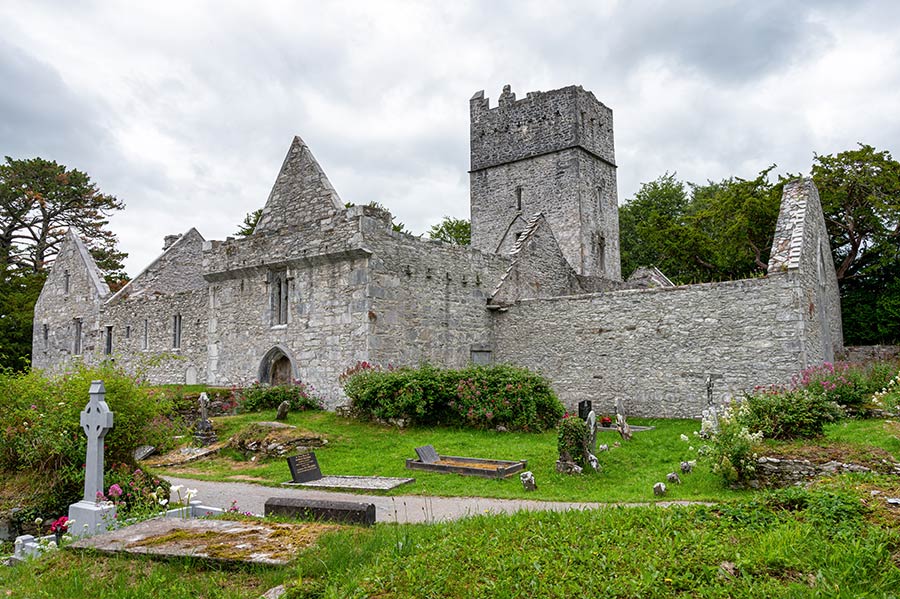 The Abbey was frequently raided, by local gangs and later the armies of Elizabeth the 1st and Cromwell, often being damaged and rebuilt. “Friars Glen” on Mangerton Mountain is said to have been one of the places the monks would flee to when the monastery was attacked. There were a series of small cottages there where the monks would shelter. This happened numerous times over the history of the Abbey. One of the darkest times in the Abbey’s history was in 1589. The Abbey was raided by the soldiers of Elizabeth the 1st. The monks fled the Abbey and took some of their more valuable items with them for hiding on one of the islands on Lough Leane.

Unfortunately, they were all captured and executed. At around this time, 2 innocent men, Fr. Donagh O’Murheely and his companion were captured, tortured and stoned to death in Muckross Abbey.

In 1652 the monastery was sacked by Cromwell’s forces under the command of Edmund Ludlow. After this though, the friars slowly returned to the Abbey (in smaller numbers), the penal laws in 1698 meant that most of the order fled to France. During this time, the Friars that returned took refuge in the Friars Glen.

During Penal times, masses were held at the Abbey which was no longer occupied. In 1788, it’s said that there was a mass held on a temporary altar. The mass was attended by 4 or 5 Friars and drew a large crowd from the local area. In 1929 the first mass was said in the Abbey since penal times. The mass was attended by nearly 3000 from Cork, Tralee and Killarney. In 1940 the 600th anniversary of Muckross Abbey was celebrated. The mass is still celebrated each July to this day.

Over the years there have been numerous stories about hauntings in Muckross Abbey and it is often considered to be the most haunted place in Killarney. There are stories about “The Ghost of the Brown Man”, a man who, upon going missing one day, was found by his wife in the Abbey graveyard feasting the flesh of one of the corpses. Another is the story of John Drake; a recluse that chose to squat in the Abbey in the 18th Century. Drake slept in one of the empty fireplaces in a box made of coffin planks. It’s said that terrible shouting and screaming could be heard at night from the Abbey but during the day it was deathly still. A young Irish Author named Bram Stoker often visited Killarney and was known to have spent time around Muckross Abbey at night. It is thought that he drew some inspiration for his most famous work; Dracula from his time in the area.

What people have to say…

“We did our trip backwards and started with the boat trip. The scenery was stunning and our boat driver was great! He highlighted a few spots on our trip and had us stop to feed the begging pheasant! Ha! We then landed at Lord Brandon’s cottage and took a pony and trap through the Gap of Dunloe. Many people attempted to walk or bike the Gap, but I can’t imagine attempting that! The roads are skinny and filled with horse and traps. The path is also very steep and winds around up the mountain path! Our trap driver pointed out the area of the Gap where they filmed the Irish Spring commercials! Just beautiful!”
Becca, Bloomington, Minnesota
View our tour gallery

This website uses cookies to improve your experience while you navigate through the website. Out of these, the cookies that are categorized as necessary are stored on your browser as they are essential for the working of basic functionalities of the website. We also use third-party cookies that help us analyze and understand how you use this website. These cookies will be stored in your browser only with your consent. You also have the option to opt-out of these cookies. But opting out of some of these cookies may affect your browsing experience.
Necessary Always Enabled
Necessary cookies are absolutely essential for the website to function properly. This category only includes cookies that ensures basic functionalities and security features of the website. These cookies do not store any personal information.
Non-necessary
Any cookies that may not be particularly necessary for the website to function and is used specifically to collect user personal data via analytics, ads, other embedded contents are termed as non-necessary cookies. It is mandatory to procure user consent prior to running these cookies on your website.
SAVE & ACCEPT